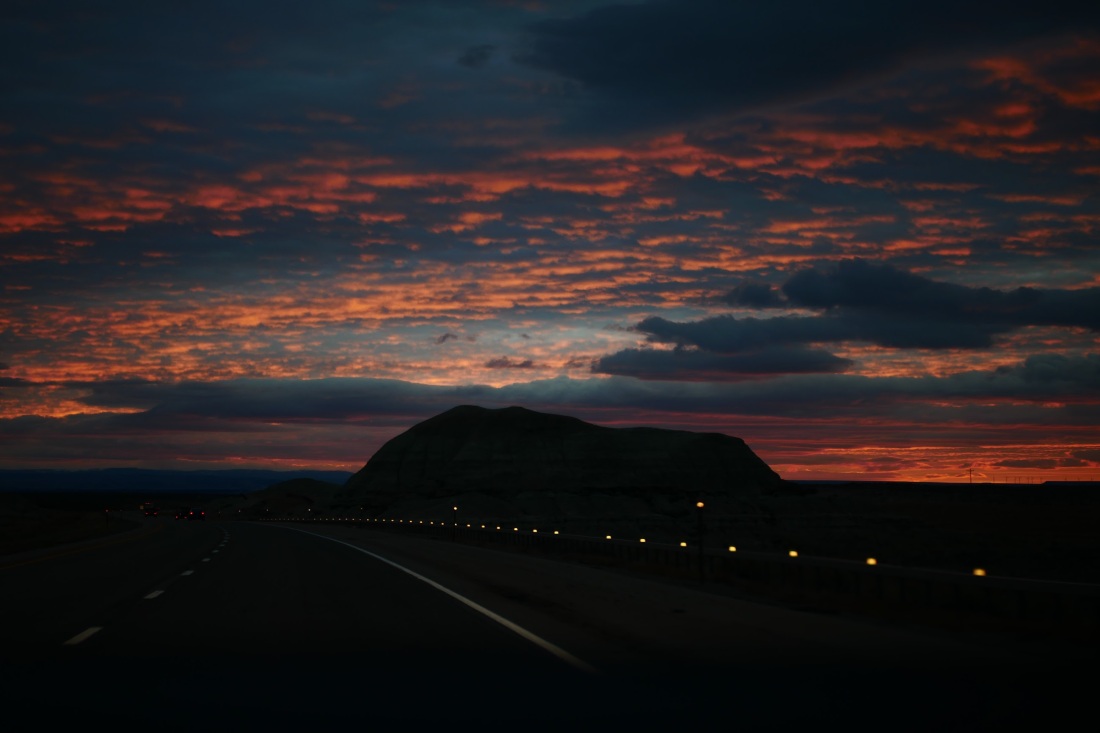 The mileage is amounting quickly now. At the start of this journey we moved leisurely and purposefully through Massachusetts and up the coast to Montreal to find time to meet with the many influential scholars who found a home in those areas. We made our way through Toronto, down to St. Louis, up to Chicago. In that early stage we generally took a week or more at each location. Going across the midwest we began to increase our pace: a few days in Madison, up to the Dells of Wisconsin, a side trip into Ames, Iowa, a dart moving west trying to escape the ever-increasing cold.

As we made our way west to Salt Lake City, we anticipated a brief stopover in Rapid City, SD. A chance to catch up on the project, to prepare for my conversation with Dr. Ed Diener (Dr. Happiness!) and to break up the travel. Those couple of days in Rapid City were extended to a week, as we wanted a chance to more fully explore the Black Hills, to see the community therein, and to make some side trips into the Badlands,  Deadwood, the Wind Cave, and the Synagogue in the Hills.

Part of this journey — the more personal part for my family — is about my son. He is 12 years old and studying for Bar Mitzvah. Consequently, we have orchestrated this Journey around a professional aim to create a book with the oral history of Psychology and to study, prepare, and help him celebrate his Bar Mitzvah in Israel. In support of that personal aim, most weekends we celebrate Shabbat with a local synagogue or temple. We have visited very different communities and synagogues in a half dozen different places, helping him to understand the many expressions of Judaism.  Especially as we travel and isolate ourselves from the places and people that we knew, going to synagogues and temples has been fulfilling. Communal. People are welcoming and seek to include us in their practices. They invite us into their lives and have been generous including us with their families and friends. It has made religious philosophies, ideas, the Hebrew language, prayers and practices a part of this journey — more so than had been our custom in years past.

So, as a part of that effort, this past week we went to the Synagogue in the Hills. This week was special. An atrocity had occurred in a synagogue in Pittsburgh the week before, and 11 people were murdered for being Jewish and practicing Shabbat. That hate cast a shadow across synagogues across the world, and there was an outpouring from many, many people that this intolerance would be rejected. At the next Shabbat (the one we were about to attend), synagogues across the country opened their doors to all who wished to attend. An open invitation was issued from the Jewish community that we will stand together, that the last word on this tragedy would be the strength of our love and not the scar of this hate. And it would be celebrated with all who wished to attend: people of all faiths or no faiths. Communities.

Admittedly, while I was aware of this context for that Shabbat, I really wasn’t sure what to expect. We were in Rapid City, South Dakota. It is a modest sized place, with two movie theaters, a diverse community, and a regular stream of tourists drawn by Sturgis, SD , Mt. Rushmore, the bison herds, the Wind cave, the Badlands, and Deadwood. Moreover, the Jewish community in South Dakota is very small. The Synagogue in the Hills are a laic community who occasionally bring out a student-Rabbi to lead at important moments, but most of the time operate as a lay-lead group in a building the size of a modest family home. It was awesome.

In this living-room sized space gathered close to two dozen Jews, Muslims, Lakota-Sioux, and  practitioners and clergy and from nearby churches. In the wake of this tragedy, there was a belief in the room that we would help each other. If angry and hateful people sought to tear us apart, we would hold each other closer. There was sadness, but there was optimism. One man, Dino from the  local Lakota-Sioux, spoke beautifully to this point. Mixing Lakota and English words, he greeted us from his grandfather to himself. He spoke of his friendship with a Jewish community member and his devotion to her. He spoke of the Heyoka, backward speaking Indians, and the parallels of their  words to our backwards written book and Hebrew language. Here, in Rapid City, in a crowded room, were men and women, young to old, military, conservative and progressive, families and friends, mixed faiths and beliefs with common cause and heartfelt community.  Awesome.

I’ve been thinking about this while furiously preparing, and yesterday meeting with, Dr. Happiness. Time and time again in the research it has been found that one of the strongest predictors of happiness is social relationships. Do you regularly talk and interact with people? Do you love some people and believe that they love you? Do you like some people and think that people like you? Happiness is process (not a static goal state) and largely it is a process of being engaged socially, feeling a sense of belonging, feeling a sense of gratitude, feeling altruistic and generous to people around you, feeling a willingness to be engaged, open, and involved in a community.  As we journey from place to place, person to person, we have been seeking community. Sometimes we enter as strangers, sometimes we find ourselves with a chance to join with family and friends. On this Journey, being a part of new Jewish communities each week is our process for belonging and to fight against the xenophobia and isolation that accompany a long stay on the road. The people of these communities are excited to welcome us. They have gratitude for the opportunity to share with us their practices, just as we feel gratitude for the community they offer.

I am grateful to the Synagogue in the Hills for their welcome, to the community of Rapid City from their togetherness in a time of divisiveness, and to Dino for showing me a part of the American culture with a greeting of open hand. Pilamaya!

(Photo* from the landscape stretching between South Dakota and Utah, taken during the long 11-hour drive we did that day by Alexis Yael)